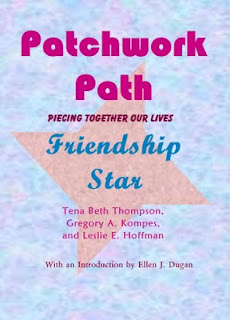 I was excited that my contributor copies of the anthology I wrote for, arrived in the mail this weekend. I had written about a woman I met back when I lived in Grand Blanc, MI. I had been assigned to write an article on her and when I did the interview (over the phone), I felt a real connection to her. A month or two later, she called one of the editors to see if she could get more copies of the article. I happened to be at that office near Flint, MI that day for the Christmas party, so I offered to drop them off. I ended up staying for hours since she had made dinner for me in the hopes I'd stay. After that, we became fast friends and spent a lot of time together. She told me about living in the South and the hardships she went through because of the racism in those days. We shared so much and had so much fun together despite our 40-some year age difference. I was devastated when she told me she didn't think she had a lot of time left because of heart disease. I learned so much from her and losing her was one of the hardest things I've had to deal with. I can only hope that I captured the kind of person she was in my essay so that people can learn from her the way I was blessed to have done.

Popular posts from this blog

I’m giving away a copy of a Christian anthology that I have two stories in called Women of Passions: Ordinary Women Serving an Extraordinary God. Their website is: http://womenofpassions.net. It was an honor to be included in this anthology and I’m excited to give a copy out. To be entered in this giveaway all you have to do is leave a comment on this post. You’ll get an additional entry if you follow my blog and another if you link to my contest and let me know about it!
Read more

- June 27, 2009
I've been trying to wrap my mind around Michael Jackson's death. Over here, the European music stations have been playing his music videos non-stop. They've been showing a lot of Michael's newer stuff that I hadn't before like the "Stranger in Moscow" song, etc. But having them go through the catalog of his work really triggered a lot of memories and reminded me what a big part his music played in my life growing up. I can remember dancing to his music in nursery school. When a neighborhood friend came over to play, I remember she was wearing a Mickey Mouse t-shirt and her mom said, "Annie loves Mickey. She wants to marry him." My mom looked at me (wearing my baby blue iron-on MJ t-shirt) said, "My future son-in-law might be Michael Jackson." I used to carry my MJ slouchy fake leather purse with his picture on it--the same one all the middle school and high school girls carried. I'd see the older girls at the bus stop wi
Read more

Krysten Lindsay Hager
I'm an author for teens, tweens, and adults. Check out my novels: True Colors, Best Friends...Forever?, Landry in Like, Dating the It Guy, Next Door to a Star, Competing with the Star, Can Dreams Come True, and In Over Her Head: Lights, Camera, Anxiety. Find me at my website at: www.krystenlindsay.com