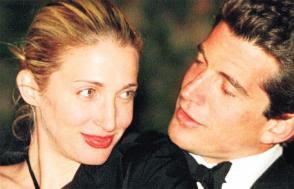 I first heard about Carolyn Bessette back in high school where I was obsessed with fashion and spent more time pouring over magazines than my school books. I was in sociology class when I first saw a picture of her at a dinner with John F. Kennedy Jr. I had, like every other female with a pulse, thought he was adorable since he tamed his huge hair. I remember going to New York in 1997 and telling my sister we had to save our film when we went to Central Park in case John was playing football there. I literally took the camera from her and said, "Take all the pictures you want when we get more film, for now, get your priorities straight."

When I first heard the news in 1999 that their plane was missing I felt sick. I felt worse when they found the wreckage. But what shocked me in the days that followed was the way Carolyn's name was smeared in the press. They blamed her for a late take-off, for possibly using her phone while in flight, and accused her of everything under the son. This was a woman who shunned the spotlight even when every magazine on the planet wanted her on the cover. Now she was being torn apart on the tabloid covers. It was disgusting.

I had always admired Carolyn's style and I admit I bought things she had. The many black dresses that I bought because they were replicas of hers, the brown Calving Klein pants, the camel skirts, etc. And, yes, that is why back in 1999, I dyed my very dark brown hair blond for the first time. Sure my first attempt was more Jennifer Lopez than Carolyn, but by the end of the summer I had Carolyn blond...and a lot less money in my bank account due to the constant root touch-ups. But she was my fashion icon and if you look at any picture of her today, her clothes and makeup do not look like they were from eleven years ago, but as if she could have been photographed yesterday.

I live right on the Atlantic Ocean right now, although since I'm in Portugal I am on the other side of the coast. For the last three years being here, I have thought about the three of them on this day and the fact they passed away in the ocean and said a little prayer. Normally celebrity deaths are sad, but then the feelings pass, but with this tragedy, it was harder to let go of somehow. Rest in Peace John, Carolyn, and Lauren.

Christina Rodriguez said…
I can't believe so much time has past since their deaths. She really was a stylish woman.
July 21, 2010 at 2:59 PM

Krysten said…
It's crazy to think it's been that long. I can only imagine what life would have been like for them had they been around during the TMZ.com, celebrity tabloid years like now.
July 21, 2010 at 3:48 PM