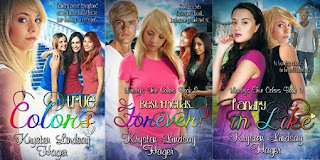 Blurb: Landry Albright just wants to be one of the interesting girls at school who always have exciting things going on in their lives. She wants to stand out, but also wants to fit in, so she gives in when her two best friends, Ericka and Tori, push her into trying out for a teen reality show modeling competition with them. Landry goes in nervous, but impresses the judges enough to make it to the next round.

However, Ericka and Tori get cut and basically “unfriend” her on Monday at school. Landry tries to make new friends, but gets caught up between wanting to be herself and conforming to who her new friends want her to be. Along the way she learns that modeling is nowhere as glamorous as it seems, how to deal with frenemies, a new crush, and that true friends see you for who you really are and like you because of it.

What people are saying about the Landry’s True Colors Series:
From Teenage Book Recommendations in the UK: "This is a fantastically relatable and real book which I feel captures all of the insecurities and troubles which haunt the modern teenage girl. It is about a young model who has to go through tough times when she is torn between a life as a model and managing her friendships. You learn which friends she can most trust and which will create the drama typical of teenage life. Follow the life of Landry and try to see if you can find out which are her true friends before their true colours are revealed. This book is all about relationships, hopes and truth. I loved this book!"

From Books & Authors Spot: “This book is such an inspiration for those who just care about their looks and are tensed about them. This thing is looks aren't everything. This book is related to every teen's problem. Hager has written a very inspiring novel.”

“Krysten captures the teenage girl today. The struggles are real, the issues are something children have been dealing with since before I was a teen, and oddly-Krysten captures the readers! I was prepared for another "Mean Girls" story. This is NOT that. This is the real story of teenage girls! You watch Landry flower into a young woman who finds out trust is an invaluable item to find, and friendships are hard to seek genuine realism in. You will learn about relationships with not just friends, but peers, boys, and others. The details put into the book will draw you, and make the story so much more realistic. Krysten expresses emotions beautifully through her writing, and the story flows flawlessly…” By Candice J. Conway Simpson

“True Colors, is just a dazzling story of how middle school kids show their true colors of jealousy, drama, loss and gains of friendship. However, the way Krysten wrote her story; she wrote it with passion, creativity and honesty that this story line could be placed in anyone's life at any age.” Review by Double Decker Books

“Krysten Lindsay Hager understands what it means to be a teen today, and she writes with an authentic voice. Landry, the main character, is funny, lively, and very real. Readers will relate to her struggles with friends and family, self-esteem and self-discovery, boys and school and life in general. It's fun to read about Landry's blossoming modeling career and the changes it brings.” Review by Author Diana Jenkins

Excerpt:
The competition was for girls between the ages of thirteen and seventeen, but it felt like Ericka, Tori, and I were the youngest ones there. I only saw a couple of girls from school, and the lineup looked more like something you’d see on a music video set. All the girls were gorgeous, and they had these curvy womanly bodies. I looked like a skinny little kid next to them. The first girl walked out, and I heard the judges say she “owned the runway,” and, “walked like a gazelle.” I was starting to feel ill. I wasn’t sure which way it was going to come, but I knew I had to find a bathroom — fast. I started to get out of line when Ericka grabbed my wrist.

“It’s almost time,” she said. A tiny bit of spit flew out of her mouth and hit my cheek.

I wasn’t sure why she was so intent on me going through with it, but she had a death grip on my arm, so I didn’t have much of a choice. Her number was called and she walked out to the stage. One of the other girls said she walked like a kid with sand bucket stilts on her feet, but she came back with a smirk on her face like she knew she’d get chosen.

“They said they had never seen such long legs,” she said.

“She walks like a gorilla at feeding time,” said the girl behind me. I went next, and I tried to focus on not tripping over my feet. My mom’s pumps had a rubber sole on the bottom, which probably wasn’t the brightest idea seeing as my shoes were making squeaking noises as I walked. I was so nervous I couldn’t stop smiling as I walked. I looked like the plastic clown who blows up balloons with its mouth at the Pizza Palace. When I got to the end of the runway, I tried to cross my feet to turn like the other girls had, but I over rotated and ended up doing a full spin which made my kilt fan out and gave the mall walkers a view of my blue underpants. I tried to act like it was intentional and did an extra turn. One of the judges put her hand up to stop me, and I held my breath as she started to speak.

Best Friends…Forever? (Book 2):
Landry Albright hopes the new year will start off in an amazing way—instead she has to deal with more frenemy issues, boy drama, and having most of her best friends make the cheerleading squad without her. Suddenly, it seems like all anyone can talk about is starting high school next year—something she finds terrifying.

Landry gets her first boyfriend (her crush, Vladi), but then gets dumped just as things come to a head with her friends. She feels lost and left out, but finds good advice about dealing with frenemies from what she considers an unlikely source. Landry faces having to speak up for what’s right, tell the truth (even when it hurts), and how to get past the fear of failure as she gets another shot at competing in the American Ingénue TV show modeling competition. Will she get a second chance with her friends, fame, and Vladi?

Landry in Like (Book 3):
Things seem to be going well in Landry Albright’s world—she’s getting invited to be on local talk shows to talk about her modeling career, her best friends have her back, and her boyfriend Vladi has becoming someone she can truly count on…and then everything changes.
Suddenly it seems like most of the girls in school are into hanging out at a new teen dance club, while Landry just wants to spend her weekends playing video games and baking cup-cakes at sleepovers. Then, Yasmin McCarty, the most popular girl in school, starts to come between Landry’s friendship with her best friend Ashanti. Things take a turn when Yasmin tells Vladi that Landry is interested in another boy. Can Landry get her relationships with Ashanti and Vladi back or will she be left out and left behind?

Author Bio:
Krysten Lindsay Hager writes about friendship, self-esteem, fitting in, frenemies, the celebrity world, values, and self-image in True Colors, Best Friends…Forever? Landry in Like, Next Door to a Star and Competing with the Star. Best Friends…Forever? was ranked at #1 on Amazon’s Hot New Releases in Teen & Young Adult Values & Virtues Fiction and True Colors is an international bestseller. Her work has been featured in USA Today, The Flint Journal, the Bellbrook Times, the Grand Haven Tribune, and on the talk show Living Dayton.